What we can’t measure, we can’t improve

Posted on January 20, 2017 by mechatronicsguy

Quick and dirty post showing something I made this morning to aid in troubleshooting the filtration system at Robots and Dinosaurs.

Members from RnD have been building and rebuilding our own lasercutters for years. Mostly building our own because we got started before readymade commercial lasercutters of a decent size were affordable to the hobbyist, and if you wanted a machine you needed to spend six months whittling your own from lumps of aluminium. (Nowadays most cheap Ebay lasers are probably the place to start)  But filtering the fumes has always been a bit of a dark art.

We’ve both made filters from scratch, and bought various commercial filters. Every filter is  some combination of a coarse pre-filter, bag filter/wool filter, then putting the output through an activated carbon bed.

Getting a filter that works isn’t the hard bit. It’s getting one that won’t clog up after a week’s use that’s tricky.

Recently we changed lasercutters, and getting the filter going again nicely has been tricky. There’s been discussion about putting fans before or after the inlet, the arrangement of the bags, and which bits are sealing well.

Anyhoo. It occurred to me that a lot of the problem has been that it’s tricky for us to figure out when something’s changed, if the filter’s full, or if a given modification makes the situation better or worse.

After a quick trip to the hardware store, and also getting some pneumatic fittings from my toolkit, here’s what we’ve got:

The U-shaped tube contains water and food dye, and was filled with equal amounts of sucking, blowing and cursing.

I drilled in the case of the lasercutter, on a point which connects to the exhaust plenum, and made sure it seals tightly. Note the use of the air fittings allows us to disconnect the gauge from one point and measure from another, so we can narrow down pieces of equipment during troubleshooting.

During use the gauge doesn’t change by much. This is showing the delta pressure between the lasercutter body and after the first pump: 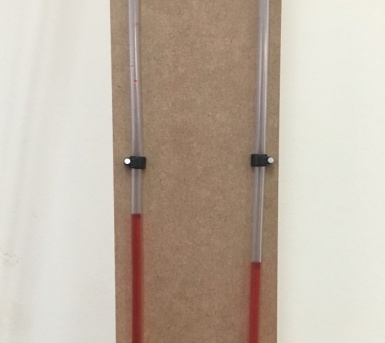 I’ll add an adjustable scale to it shortly, but it’s not a bad indicator for now. We’ll probably play around with measuring the pressure between various locations while we’re troubleshooting.