Posted on February 1, 2015 by mechatronicsguy

I had a rather nice find today. Picked up a glass Kipp’s generator (from the always enjoyable Professor Plum’s for the modest price of $75.)

Although I’m sure this one is a modern replica, the idea of a Kipps generator is really from another era. Before you could just buy a cylinder of gas off-the-shelf to experiment with, you’d have to produce it yourself.

Moreover, if you’re wanting to react two chemicals together to generate some gas, exactly how much of each should you mix? And how do you store it until it’s ready for use?

This is a problem straight out of control theory, or as it’s sometimes known, cybernetics. In the same way as it’s important to have a automatic feedback loop (such as a governor) in your steam engine, controlling the rate of gas production is extremely important if you’re, say, making hydrogen gas in a lab environment.

The way the Kipp’s device solves this is extremely elegant and simple. By separating the liquid and solid reactants, and using air pressure to push the liquid down, the reaction stops. Removing gas causes the liquid to rise, which starts the reaction again.

No explosion hazard, no runaway reactions, it’s all taken care of with some well designed glassware and a single tap.

A standard way to run one of these would be with something like mixing zinc and sulphuric acid to generate hydrogen gas. I didn’t have either to hand, so I started thinking of what I could use to test it that I could get late afternoon on a Sunday. Here’s what I came up with: 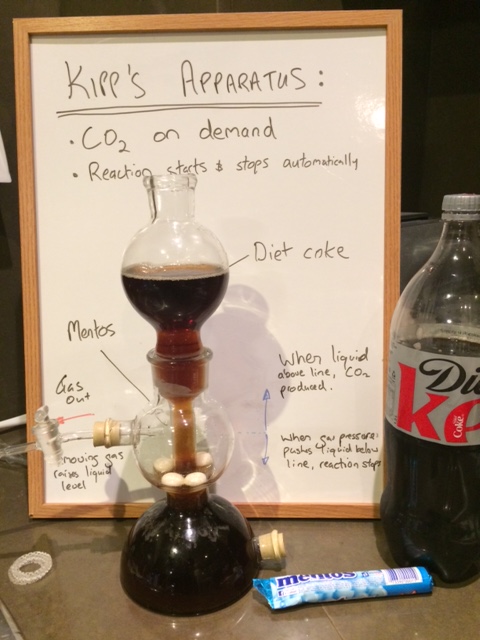 After using up some of the gas via the tap, the liquid level rises enough to cover the mentos: 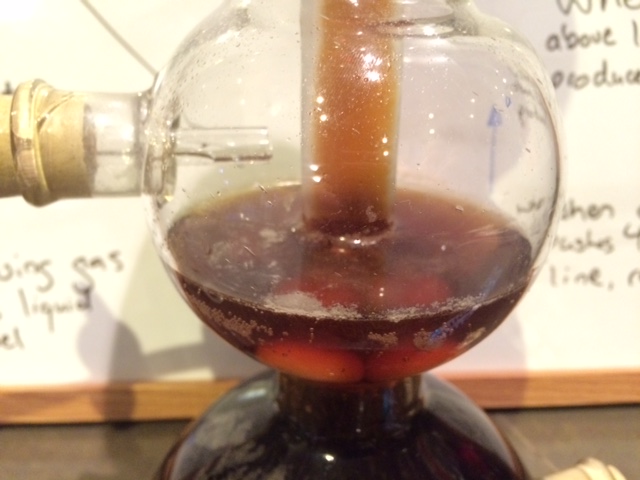 which starts up more gas production, until the liquid level is pushed back below the mentos again: 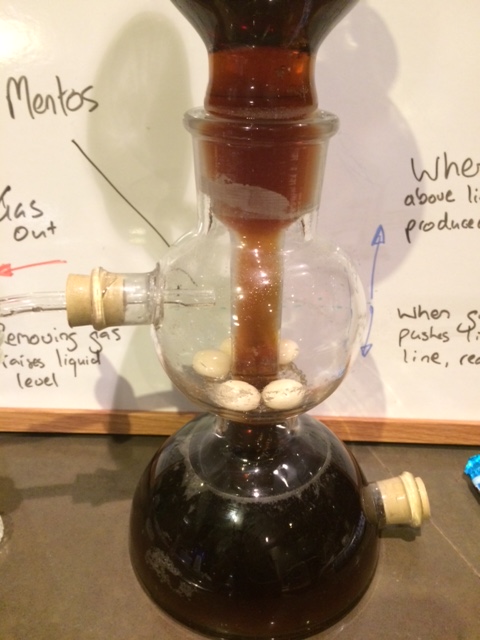 This takes about minute or two to generate enough gas. I also tried running it while removing gas constantly, and it behaved pretty well.

Now to be fair, this isn’t quite the normal reaction you’d run in a Kipp’s apparatus. The CO2 is just dissolved in the diet coke, rather than actually produced in a chemical reaction, and also if you leave the mentos out completely, you’ll still get some gas generated from the liquid. But seeing the slowness of the diet-coke-plus-mentos reaction compared to the violence it’s famous for makes me appreciate what a cool bit of glassware this is.