Like a lot of people into making and electronics, I have huge number of parts. I do quite a bit of making at Robots and Dinosaurs, at home, and at occasionally at work, so I’m often travelling with parts to use during the day.

There’s another, very very large reason why I needed to get my organisation sorted, but I’ll cover that in later post.

Before I show what I ended up with, here’s some other strategies I’ve tried previously:

Adam Savage is a good source on this, and he’s clearly spent a lot of time looking for good systems. If you haven’t seen it, check  out his toolboxes and the a principle called ‘First Order Retrieveability‘. You shouldn’t have to move one thing to get to another.

So, after chewing on organisation strategies for a couple of days, here’s what I came up with as a wishlist of features:

With that in mind, here’s what I built in the last week. I was heavily inspired by Adam Savage’s parts rack, but I didn’t want to spend $3000+ on the Sortimo rack and cases.

I got a bunch of Tactix boxes from Bunnings for $12 ea. We use them in the makerspace for storing M3/M4/M5 screws and bolts, and they’re brilliant. The lids indent and grip the interior tubs to stop sliding, and when it’s closed you don’t get ‘cross pollination’ between compartments if you happen to invert the case. (I’m sure the proper Sortimo ones are better, but at $~60 a case it’s too rich for my blood. )

(Photo stolen from Bunnings, but hey, I like your stuff, ok?)

Also handy is being able to pull out a single tub from the case and take them to the bench while you’re working. If your collection grows, reorganising is just a matter of lifting and shuffling whole tubs around (Compare this to fixed ‘tackle boxes’, where reorganizing compartments can mean using tweezers to fish hundreds of tiny fittings out).

Another good trick I found is to cut the labels off packs and tape it to the drawer. Saves trying to identify the difference between a 12mm and 15mm screw by eyesight when you’re in a hurry, and when you run out you just stick the empty box in your bag and grab more next time you go past the hardware store.

The trays are awesome, I just needed a way to keep them organized. I wanted something simple, easy to transport inside the house, and as dense a storage as possible.

Here’s a pic of the just assembled rack, starting to test the fit:

and starting to get filled with cases. (Yes, my kitchen is messy, I was sorting 10 times my bodyweight in parts…) 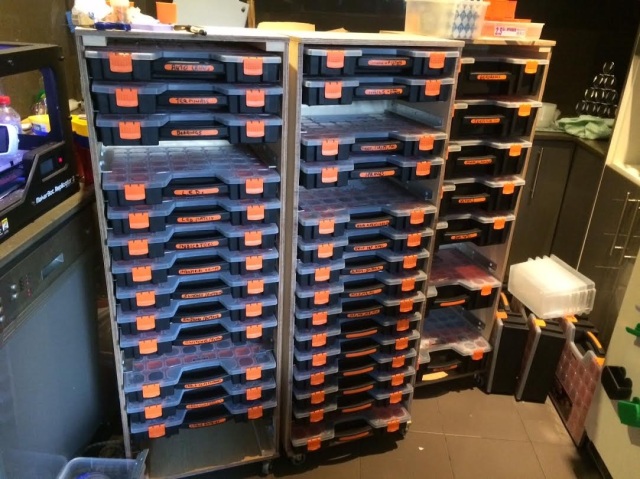 When it’s in place the wood top will be kept bare, so that you have a surface to rest cases on while you’re fishing around for parts. Here’s a quick sketch of the plans if anyone wants to make their own. It uses three sheets of 1220x610x12mm marine plywood, and makes a minimal number of cuts. 270mm x 25×25 ‘L’ extrusion is used for the rails, and is spaced every 70mm vertically for the smaller boxes. Some wheels on the bottom give portability. 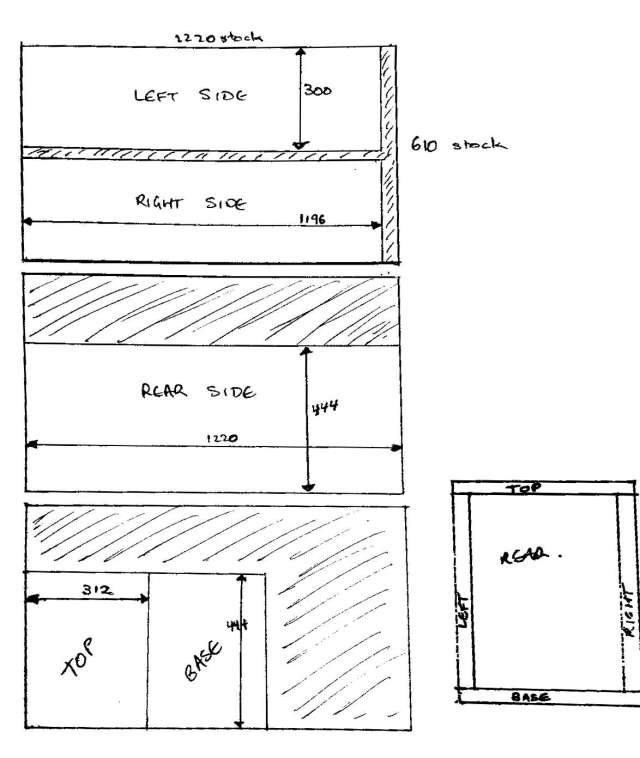 Here’s the price breakdown per rack:

Not too bad, all things considered, and it should suit me for years to come.