I saw this video recently, and fell in love with the Atomix toy. Sadly it seems you can’t get them anymore. However, I remembered that in the garage  I had over a thousand Japanese pachinko balls left over from a previous project…

This was a quick one evening build, I just wanted to get it done before I got distracted. Some sawing and cutting later, and here’s what I have: 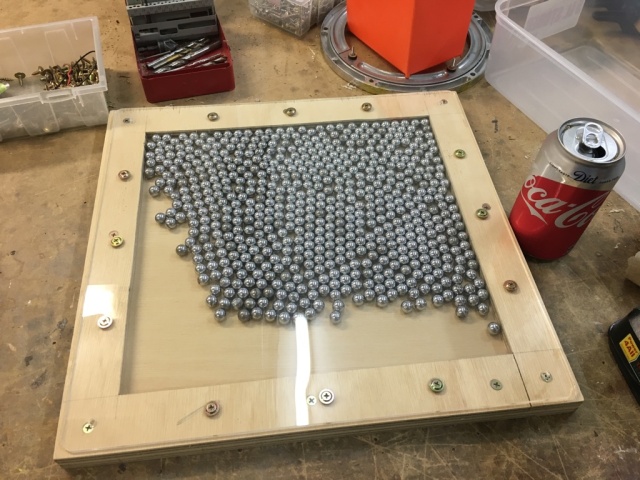 Can for scale, as with all my projects

I used thick 12mm thick plywood I had laying around the space, and a bandsaw-box like technique to cut out the inside of the frame. The front is lasercut 3mm acrylic, which I was originally worried might not be up to the job of keeping 3kg of agitated steel contained, but after shaking it a few times it seems to be sturdy enough.

You can hold the frame and shake it by hand, but I wanted something to be a bit more play-friendly. I had a lazy-susan bearing kicking around after I did various rebuilds of  a robot several years ago, and I decided that would allow some gentle motion.

4×2 lovingly cut, and expertly screwed together in whatever fashion got it done before bedtime.

With two wood pieces acting as a tilted base, the whole assembly sits tilted on the table and can be gently rotated with a light touch.

It’s certainly very  satisfying to play around with, you can see the fault lines, grain boundaries, different orientations, gaps and other nifty crystallographic features. And for a one evening build I’m very happy with it.

Also, words can’t express how noisy the 11mm pachinko balls are compared to the ~1mm ones Steve used in his model. However provided you’re the one using it, it’s relaxing and soothing like a rain machine. (However if someone else is doing the playing, for some reason it doesn’t seem quite so serene…)