I was inspired by Tom Scott’s excellent video and links here https://www.youtube.com/watch?v=d99_h30swtM

where he talks about a particular type of “Inogon” light used to guide ships through channels or harbours.

The patent is here: https://patents.google.com/patent/US4629325 and the military report on the effectiveness is here: http://www.dtic.mil/dtic/tr/fulltext/u2/a168108.pdf

I decided to build my own to play around with the effect. After a few minutes sketching in inkscape and a few more lasercutting,  I had this: 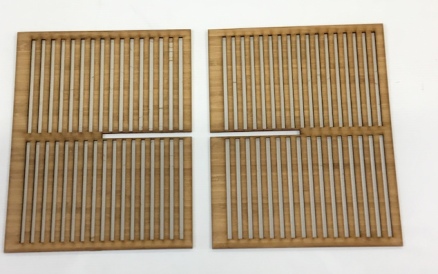 I followed the claims in the patent fairly closely. They advocate between 1.5 to 1.8 ratio of pitch spacing to the width of the dark bands, and I used 1.65 (this yields a mask with a ‘duty cycle’ of around 40%), and to use only a single excess band on the first mask relative to the second.

Here’s what it looks like when illuminated from the back, and dead-on to the beam: 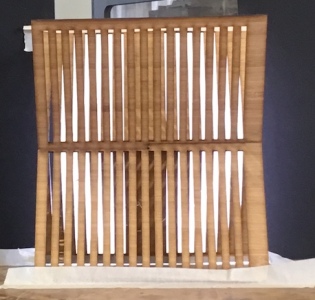 (There’s some minor circular effects because the separation of the two grids is significant compared to how close I’m standing. If this was on a riverbank and I was 100m away, that’d disappear)

Am I happy with it? You betcha. It does exactly what it says on the tin. It’s a intuitive and nifty way to guide a vehicle, requires very little ‘calibration’, and can cope with a dozen or more people using it at the same time without any problems.

Do I think it’s the clear best solution to the problem? Sadly no.

Typically a harbour doesn’t have one razor-thin path of traversable water. Instead there’s a clear pathway that you shouldn’t stray too far away from. The Moire system will give steering advice even if you’re in a safe area, but slightly off the main ‘beam’.

I remember a few years ago in Newcastle seeing a much simpler and elegant system using 3 lights like below. (Excuse the mess, I grabbed whatever I could find nearby so I could compare the two approaches at around the same scale).

In a real situation when you’re manoeuvring a ship there are other factors to think of, such as cross-currents, weather, or other ships to avoid. Having to stick to a narrow platonically perfect course has a non-zero cost in terms of extra fuel used, demanding increased concentration, higher risk of accidents as everyone is trying to use the same line, etc.

If I were a pilot I think I’d much prefer a system like the 3 lamp, that lets me know when I’m actually in danger, rather than a system letting me know I’ve deviated from a line someone drew on a map.

However,  it’s a super cool bit of design and maths, and I do think the system is useful when the object you want to mark is actually narrow. In the youtube video it was marking a submarine cable, so people didn’t drop anchor and foul on it. That seems like the perfect use for the Moire pattern.

Files are here for anyone that’s interested in making their own: